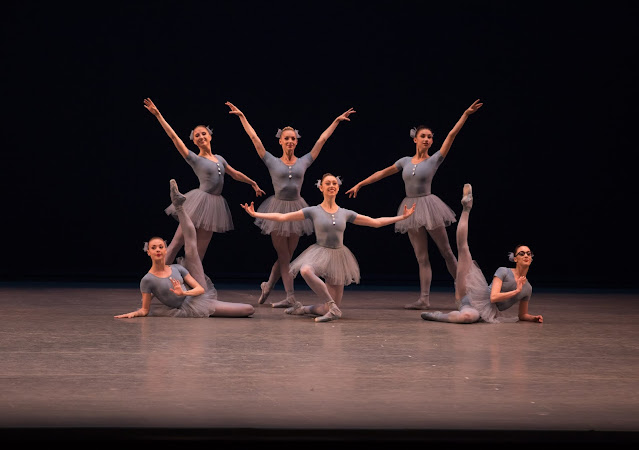 Another sign of cultural life reviving! New York City Ballet returned live to the stage on a mild evening in July with a brief stint at its upstate home, Saratoga Performing Arts Center (SPAC). It presented two programs of excerpts with commentary—one of story ballets, which I saw on July 14, and another of Balanchine's abstract works. It was great to see the company in the vast, dramatic, tree-framed setting of the Amphitheater, with similar grand stage dimensions to the Koch, and the casual structure of the program allowed the company to ease back into preparations for a full season of performances.

The wide-ranging "Short Stories" program was moderated by principal dancer Maria Kowroski, who demonstrated a genial speaking presence to go with her in-depth, personal knowledge of the dances. The three sailors (Amar Ramasar, Spartak Hoxha, Lars Nelson) in Jerome Robbins' Fancy Free discussed the nature of their characters, and each shared a move from the dance that encapsulated a characteristic (although three rounds of questions seemed a bit much). Teresa Reichlen and Tyler Angle (with a shaved head!) performed the white swan pas de deux from Swan Lake. Reichlen's stage demeanor is consistently stoic and secretive, and in this case, served to provide some welcome gravitas to the performance, isolated from the context of the story.

Such context was also missed in the next segment, the Rose Adagio from The Sleeping Beauty. Meaghan Dutton-O'Hara debuted as Aurora, no small feat given the short amount of rehearsal time (weeks) in which to cram for being partnered by four men in one of the most difficult passages in classical ballet. The lack of rehearsal time showed in some off-balance partnered promenades, which no doubt will be smoothed out with more practice. Associate Artistic Director Wendy Whelan came onstage to give some notes, including the advice to take one section at a time so as not to be overwhelmed, and to "be the rose," firmly planted and growing tall and proud. Another segment from Beauty followed: the opening of the Bluebird pas (Sara Adams and Spartak Hoxha), which felt suitably antic and exuberant given the plein air setting.

A duet from Midsummer Night's Dream also matched the al fresco ambience. Miriam Miller fell for the donkey-headed Lars Nelson, who only had eyes for his grass. And the "Mistake Waltz" from Robbins' The Concert elicited chuckles from the audience, and reminded us of the humor that he often deployed. The finale, a segment from The Firebird featuring Reichlen and Ramasar, once again revealed the sense of occasion that Reichlen brings to the stage to magically train our collective focus. Full costumes helped to signify some of the context of each story segment, which were accompanied by piano scores—whose arrangements at times were by nature sketchy—played by Alan Moverman and Nancy McDill.

While NYCB's 2021 run at SPAC can barely be called a season, it was a welcome return of live arts after such a horrendous year and a half. The company recently released its full schedule for the 2021-22 season at the Koch Theater, another welcome reminder that New York's cultural life is ramping up for, hopefully, a return to normal.