A Fine Sampler of Contemporary Ballet at the Pillow 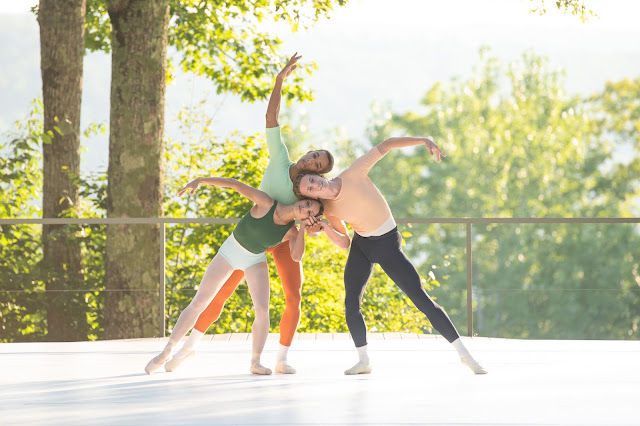 From seeing Jacob’s Pillow’s Ballet Coast to Coast program in late August, contemporary ballet looks to be in good shape. Three accomplished companies brought chamber-sized works to the outdoor Leir Stage in the final offering of the Pillow’s robust summer festival, which had to cope not only with the pandemic, but the dodgy summer weather which caused many cancellations. The slate balanced humor, expressionism, and formalism in works by five choreographers.

Boston Ballet began the show with Helen Pickett’s Home Studies: Parlor Floor Life (2021), inspired by a film, in which Lia Cirio, Paul Craig, and My’Kal Stromile plopped on a sofa like restless kids, sticking their legs up and messing around. In a solo, Stromile used his long limbs and superb line to accentuate the expressive gestures and articulations to maximum effect. Cirio and Craig partnered in a duet, showing Pickett’s explorations in how two bodies can interact in new ways—a foot flicking between legs, or him pulling her in a circle by one of her feet extended high. After a year and a half spent on the sofa, the visual jokes involving boredom and antsiness hit home.

Houston Ballet’s two excerpt offerings, in contrast, showed ballet at its most fluid and lucid. Stanton Welch’s Sons de l’Ame (2013), with Karina González and Harper Watters, featured simple poses connected by flowing, elegant moves. Each line was continually elongated; there never seemed to be any excess movement or embellishment. Even the flesh-hued leotards served to focus attention on the purity of line, the essence of classical ballet. (This piece reprises at City Center's Fall for Dance this season.) Justin Peck choreographed Reflections

(2019), and the trio is a prime example of his sheer fluency in the language of ballet. Small traveling steps included backward low jetés, a twist on a basic element that felt radical. The color block leotards with white belts might allude to Balanchine and Robbins’ frequent reliance on such simple costumes to better free the dancers (Chandler Dalton, González, and Watters); the seamed pink tights worn by González evoked the classroom staple of ballet students everywhere. The ending tableau—their three heads turned sideways and stacked, arms framing them—beautifully punctuated this work, which the dancers clearly enjoyed performing.

Ulysses Dove’s Red Angels (1994) was performed by Pacific Northwest Ballet. It actually felt less of its period this year than when I last saw it, several years ago, on NYCB. All graphic angles and hyper-articulated torsos and deep, squatty pliés, it has a torero-like feel, abetted by the general fierce attack and the red unitards with sternum lacing. It showcased the charismatic Christopher D’Ariano, Elle Macy, Amanda Morgan, and Dylan Wald. Some of the classical steps, like fouettés, were unpolished, but the catwalk attitude was spot on.

Dancers from all three companies performed in Second to Last (2013), the finale by Alejandro Cerrudo. A series of fluid duets, composed of elastic limbs and attenuated, expressionistic lines, were quite beautiful, but somewhat repetitious. Perhaps the choice of Arvo Pärt’s by-now overused music dictated the lack of dynamic. But the concept of uniting all three companies rang true in a divisive and isolating time.