No Rest for Fires and Floods

On vacation in Montana, I find that even while escaping the final dog days of NYC (which are, as it turns out, ideal, weather-wise), it's impossible to escape the fiercest that mother nature has to offer. There's a fire in nearby Pine Creek that has so far consumed 5000 acres. The clear blue endless sky has been replaced with a pewter blanket of smoke, the air slightly charred and insinuating itself into the lungs. The Livingston Fire Department has been posting updates on its Facebook page.

I just heard from a friend in New Orleans who is dealing with Hurricane Isaac, which struck—melodramatically, biblically—on the same date as Katrina. He writes for the Times Picayune, at least for a little while more, and emailed from a blacked-out office there. To top it off, he has family up here in Montana, in a nearby town, who have been evacuated from their home.

So on the one hand, up north, fast-spreading fire in a droughted area, where the brush this year is the color of Van Gogh's wheat fields, crispy as puffed rice. On the other, another scary hurricane aiming and firing at the Gulf Coast. Extreme weather conditions in our most geographically beautiful spots are, scarily, becoming common. Is it too late to reverse the cycle? And will these coincidences help refocus the national conversation on global warming during this ideologically-driven election period?

After so many years of fighting charges of doping, he decided he's had enough, and dropped his argument against doping charges by the US Anti-Doping Agency.

As a cycling fan, and someone who watched Lance win so many grueling Tour de Frances, it's heartbreaking. But the only surprise is that he blinked first.

I always wanted to believe him when he claimed his innocence, even in a roundabout way, akin to "I've never been tested positive." And yet I have a feeling that pretty much anyone who contended for the yellow jersey had to keep up with the Joneses, basically do what every other top competitor was doing. The high number of winners who've tested positive is pretty good proof of that. And to bolster the idea of how prevalent it has been, the better the rider, the better the resources, lowering the odds of getting caught. And yet they have been caught.

There's so much heroic about competitive road cycling. It's more about an individual's body type, training, heart, ability to endure pain, than about the equipment or weather or whatever. There's so much sacrifice—personal, in the amount of training that's required, and from the families involved; and from one's teammates, each playing a designated role in order to further the top contender's chances.

Cycling will go on, as it has since Armstrong retired from it. Has it been as interesting? No. But as I've mentioned before, if the Tour de France—the sport's pinnacle—is so difficult that it essentially requires performance enhancing methods, perhaps it should be rethought. Sacrilege, for sure. But if it abets fairness and improves the health of the riders, who ostensibly are treating the instruments of their livelihood like lab experiments, then it should be considered before no more heroes are left.
Posted by Susan at 5:58 PM No comments:

A Star (Merkens) Shadowing a Star 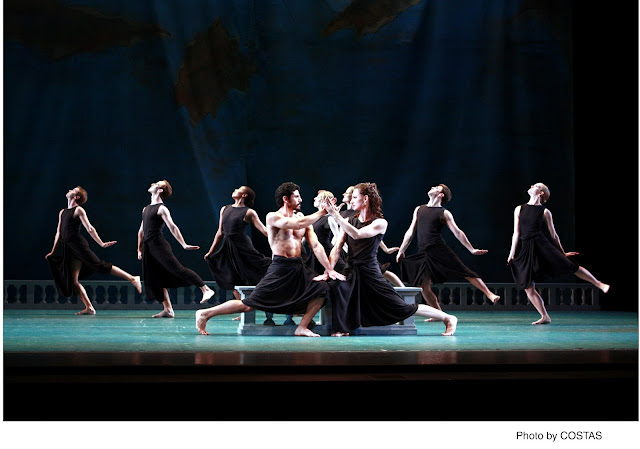 There is only one Mark Morris, for better or worse. Even though he hasn't figured out how to subdivide or clone himself, he managed to wear several hats during the Mostly Mozart run of his Dido and Aeneas at the Rose Theater (through tonight). First and foremost, he is choreographer of this gem of a production, one that remains an outstanding work in his oeuvre after 23 years. Second, he is the conductor, in the orchestra pit having a jolly old time, right across from the powerhouse mezzo-soprano Stephanie Blythe (her voice raises the roof), and other crack singers. Third, and somewhat vexing, if unavoidable, his ghost lives onstage in the dual roles of Dido and the Sorceress, now danced by Amber Star Merkens.

It's not that Merkens is subpar. She's engrossing, emotionally complex, with a whiff of the tragic. As much as I've admired her in her 11 years with Mark Morris Dance Group, she has remained unknowable, unlike so many of the company's members whose personalities have become as familiar as old slippers. That mystery has been part of her trademark. She is physically commanding, with sure, clean lines, but more likely than not bearing a placid facial expression evocative of the Mona Lisa. She communicates primarily with the rest of her body, reserving for herself whatever psychological underpinnings roil beneath the surface. 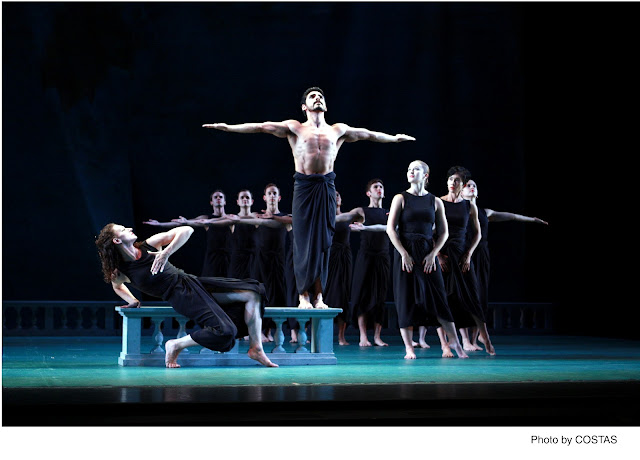 Mark Morris is one of those performers whose magnetism is a force of nature. Whatever he's performed in, he'd be the one to draw the eye. He has innate technical skills—notably his sense of balance and centering—to make any dancer jealous. But beyond his technique, his presence has always been undeniable, his sheer force or personality combined with a healthy dose of camp and humor. As Dido/the Sorceress, these traits seemed to multiply exponentially, intoxicating us in the audience along with the delightful Purcell score and the dramatics unfolding onstage via the mimetic, rhythmic movement. It will never be possible to strike the memory of Morris in these roles, alongside Guillermo Resto as Aeneas, nor should it be. It just isn't perfectly fair to the dancers who followed in these roles. (Incidentally, I fondly recall Bradon McDonald's interpretation of the roles; he perhaps came closest to Mark's exuberance, if with even more ferocity.)

Today's Dido remains engaging in different ways. Domingo Estrada Jr. is a strapping, sweet-natured Aeneas, and Maile Okamura and Rita Donahue are Dido's smart-moving right-hand women. Merkens switches handily between the stricken, midas-nailed Dido and the sinister Sorceress in part by unpinning her hair, which, when draped over her face, looks vaguely like Morris' did back when, but also with her unironic thrill in being evil. She'll never be Mark—no one will—but we take pleasure in her subtlety and with what she chooses to share of her profound gifts.

Ghosts in the Machine at the New Museum

Ghosts in the Machine, at the New Museum, is a good old-fashioned group exhibition that studies "the prehistory of the digital age," mostly 20th-century references to or incorporation of technology in art, and sometimes the art in technology. The predominance of the mechanical underscores how internal, and in a sense invisible, the digital wave really is. Hence a certain steampunk-like nostalgia pervades Ghosts.

There are a few works in the classic vein, such as Claes Oldenburg's Profile Airflow (1969), a translucent, green plastic mold of the automobile that resembles Jello; and drawings by Rube Goldberg detailing Professor Butts' demonstrations of the artist's famous jerry-rigged inventions. Francois Morellet's Sphère-trames (1962), a sphere formed of a metal grid, is an example of the numerous geometry-based, optical illusion artworks by such op-art pioneers as Bridget Riley and Victor Vasarely. Otto Piene's light sculptures have a science project feel, making good use of the lure of twinkling lights.

Breer's Floats are irresistible. Shaped like mini igloos, they are powered by motors to move in barely perceptible increments and are borderline menacing, like a big dog being overly affectionate. The film Ginrin (Silver Wheel) (1953), by Jikken Kobo/Experimental Workshop, was commissioned by the Japanese Bicycle Industry Association. It's visually striking and evocative of a certain generation's vision of the future, where bikes glided effortlessly through inky space. And Emery Blagdon's found metal object "healing" sculptures, circa the 1950s on, drape in clusters, or take on the shapes of vertical cages, entrancing in their complex simplicity.

Some work emanated from scientific representations: Channa Horwitz's "Sonakinatography" compositions, carefully constructed and colored graphs; and Bell Labs engineer Herb Schneider's "Engineer Drawings" for performance evenings by Robert Rauschenberg and friends. While a show like this cannot be comprehensive, I felt Bucky Fuller's absence. The show only strayed when it came to the inclusion of Jeff Koons' double vacuum sculpture, which felt like a slapdash, cynical addition to otherwise thoughtful curation. Or maybe it's just backlash from overexposure, unlike the rest of the engaging artists in Ghost in the Machine.
Posted by Susan at 5:55 PM No comments:

Kimmo Pohjonen/Helsinki Nelson's Accordion Wrestling, part of Lincoln Center Out of Doors, was a bracing antidote to all the ballet I've seen lately, not to mention well-timed to coincide with Olympic fever. Who knew that old-time wrestling matches in Finland were accompanied by an accordionist, who often had a following as strong as the athletes', and would provide post-match entertainment as well?

The performance featured 10 real wrestlers, representing the 10 Finnish gold medalist wrestlers from the country's history. The performers ranged in age, including two women (apparently women are not uncommon but train essentially segregated), and all possessed varying degrees of swagger and bravado. Pohjonen, the accordionist, roamed the stage like a circus ringmaster, at times providing background music, at others goading on the competitors, and on one occasion, switching into charming troubadour mode. 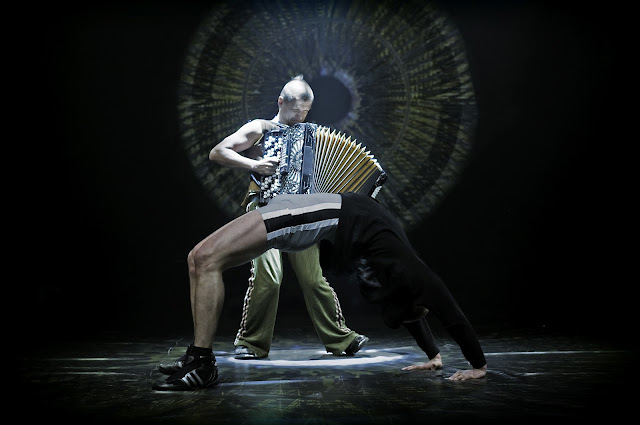 The most fascinating sections featured training and warm-up exercises done by the wrestlers, with plenty of reminders that it takes two to wrestle. One did sit ups with his legs laced around another man's waist, reversing it to do back lifts; a man grabbed another in a cat pose around the waist and, never letting go, walked in circles around him. Impressively, one fellow planted his head on the ground and ran circles around it repeatedly in an eye-popping display of flexibility and strength.

Then there were choreographed segments of one wrestler shoulder-throwing another (I'm sure there are terms for all these moves, comment if you know them), or funny solo dive-and-flip-onto-the stomach moves, plus lots of macho provocation and tomfoolery. Toward the end, the wrestlers kneeled centerstage in a circle, backs to us, and swayed like gospel chorus members as a soloist or pair flashed some moves. They broke out into silly dances, disarming for their dorkiness as well as their lack of guile. Projected text gave some history, though it was difficult to read amid the splashy graphics and busy lighting schemes. And yet the zany combination of wanting to inform while entertaining, and the unselfconscious dedication of the wrestlers, proved appealing. It ain't ballet, for sure.
Posted by Susan at 10:56 AM No comments: