Never Have I Ever Saves the Summer of 2020

Young adult shows are mainstay guilty pleasures. Riverdale is a current leading entry, although it jumped the shark a few seasons ago—Archie runs a boxing gym, and Veronica a speakeasy and rum producing company, all while going to high school and solving crimes? Mmm, okay. And Riverdale is the hotseat of syndicated crime and/or mass murderers…? no prob. I miss coming-of-age shows including Gossip Girl and Jane the Virgin and the gold standard, Friday Night Lights. But the cursed summer of 2020 has borne new tv treasures which not only tell teen stories, but embrace a more inclusive narrative.

Foremost: Never Have I Ever (Netflix, 10 episodes), created by Mindy Kaling and Lang Fisher, which follows Devi, an American-Indian teen who has just recovered from psychosomatic trauma caused by the sudden death of her father. She’s trying to get back to a normal high schooler’s life, but as we all know, to begin with that’s an overload of emotional turmoil and social awkwardness, never mind a trauma. Maitreyi Ramakrishna plays Devi in her first acting role. Apparently Kaling did an open casting call, and somehow found someone who’s naturally comfortable onscreen and talks like I’d imagine a typical smart, sassy Sherman Oaks teen would. Devi has a crush on Paxton Hall-Yoshida (Darren Barnet), a multi-racial 29 year old in real life. Amazing story—Kaling didn’t know Barnet’s full heritage until she heard him speaking Japanese, and so “Yoshida” was added onto “Hall” for his name.

Two of the cast’s other three featured young classmates are non-white—Fabiola (Lee Rodriguez) and Eleanor (Ramona Young) are Devi’s closest pals, each grappling with her own big issue. Ben (Jaren Lewison)—rich and completely ignored by his self-absorbed parents—is Devi’s nemesis at the start of the series; they’ve been academic rivals since childhood, and through the series, their relationship takes twists and turns to take them to a new level. John McEnroe is the off-screen narrator (with one fantastic guest spin by Andy Samberg), which underscores the bottled up rage that simmers in Devi’s heart.

Devi also struggles with satisfying the fraying Indian traditions carried on begrudgingly by her dermatologist mom (the acerbic Poorna Jagannathan), and even more unwillingly by her hot cousin, Kamala (Richa Moorjani), who’s staying with Devi and her mom while finishing a doctorate, and being matched up with a potential suitor by her parents. (Meta note: Kamala becomes obsessed with Riverdale after Devi introduces her to it.) Devi is seeing a therapist (Niecy Nash), so in her hilariously frank sessions, we hear what’s really going through her head.

My favorite episode is five: “...started a nuclear war.” Ben leads a team going to a model UN, and Devi joins at the last minute. (They’re such well-matched rivals that they’d split up all potential extracurricular activities between them to avoid running up against each other. Devi broke their pact for the model UN in order to escape her being grounded.) Ben (repping the USA) runs afoul of Devi (Ecuatorial Guinea), who winds up making a deal with Russia, a social outcast, to borrow a nuclear bomb to attack the US in exchange for Devi’s “real” email address. The script is perfect and hilarious, and their exchange in the UN conference is an apt metaphor for all the complexities of their interpersonal angst. Ramakrishna’s timing and realistic cool-kid patois are remarkable, and she’s allowed to look like a regular teen, not overly made up or too glam to be believed. Best of all is the dialogue, worth rewatching the season to catch every brilliant bit of snark and wit. A second season has been slated. Hallelujah! 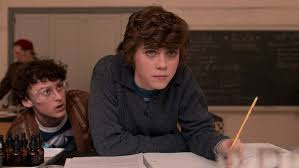 Wyatt Oleff & Sophia Lillis in I Am Not Okay With This
I Am Not Okay With This (Netflix) shares devices with Never. High schooler Sidney (Sophia Lillis) also lost her dad at a young age, and she’s also undergoing therapy sessions, which reveal some of her deepest thoughts. Her blue collar mom also struggles to relate to her and be there as much as she and her little brother need. Sidney also deals with intense rage and trauma, but hers manifests in telekinesis, rather than McEnroe. It’s violent, and at first uncontrollable. Stan (Wyatt Oleff) is her weird, endearing neighbor/classmate who becomes her friend and confidant, and develops a crush on her. Her usual BFF, Dina (Sofia Bryant) has been ditching Sid for a popular, cheating football-star boyfriend. I haven't finished the first season, but its brand of quirk and angst are addictive.

I never read The Babysitter’s Club books, but the new series is endearing in a nostalgic way. The title is basically the plot frame; for some reason, the five core girls comprising the club have to gather in cool kid Claudia’s room and wait by a landline phone for jobs to come in (while they all have cell phones). Good reason to gather them in one place. There are the expected characters twists, moral-of-the-story plotlines, clueless parents, and intergroup dynamics. All the girls live in enviable huge houses in fictional Stoneybrook, Connecticut (by way of LA, it would seem), where it never seems to rain. But it’s visual comfort food.

The racial diversity on-screen has been a welcome change in this summer of #BLM. Not so much I Am Not Okay, which has one non-white lead, but the leads are definitely off-beat. Many of the characters are basically outcasts, or struggle with relationships. Spoiler alert! At the end of season one of Never, Devi has two boys pursuing her romantically, even after conflicts with both. And in Never and Babysitter’s Club, the kids deemed “coolest” are actually Asian, or part Asian. In Never, inter-Asian racism jokes pop up, to hilarious effect. Eleanor’s mom, who’s supposed to be leading a production of Thoroughly Modern Millie on a cruise liner, turns up waiting tables in a local Mexican joint. When Paxton tells Eleanor he saw her mom there, Eleanor, not able to process the idea, accuses Paxton of thinking all Asians look alike. He tells her he’s part Asian, which shocks his doofus buddy. “That’s what the Yoshida part is, dude! Japanese!,” barks Paxton. Eleanor goes to the restaurant to see if it really might be her mom, and grabs another Asian waitress from behind. It’s not her mom, and she says, “that was really racist of me.”

And Claudia, in Babysitter’s Club, is played by Momona Tamada, of Japanese descent. Not only does her fantastic room, complete with candy hidden in the armchair, serve as HQ, Claudia is an artist, and dresses like a brazen bohemian. Without question, she’s the coolest kid around. (Tamada played the young Lara Jean in the To All the Boys' second film.) Another of the girls, Maryann, is half Black, half white. Her mom is dead (what’s with all these prematurely dying parents?), leaving her in her very white dad’s care. Maryann has worn her long hair in two braids her entire life. Turns out it’s the only hairstyle her dad knew how to do. So she changes up her hair, as well as the overalls she’s always worn, and eschews the wheelie backpack that she’s always used, which was supposed to be orthopedically beneficial. 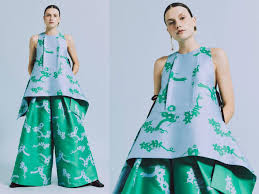 Minju Kim design
Next in Fashion (Netflix) is another show that centered Asians, both in the ranks of competing fashion designers, and in the hosting/judging spots. It’s co-hosted by a couple of cool cats—the fabulous Tan France of Queer Eye, and Alexa Chung, who is part Chinese. While season one took awhile to pique my interest—the designers begin by working in pairs, which in standards like Project Runway, usually spells forced discord—it wound up so much better than its nearest chronological competitor, Making the Cut (on Amazon, hosted by old PR hands Heidi Klum and Tim Gunn).

Spoiler alert! Several Asians wound up in the final group (by then working solo), and the winner—Minju, from Korea—was one of the least likely from the outset, at least going by traditional indicators of emotional makeup and a cool aesthetic. But her designs had straddled tradition and futurism the whole season, ultimately winding up on the latter end. Her voluminous designs were feminine, but not in the typically western way of snug fitting, comfort second, and high heels. Minju’s aesthetic really does feel like a way forward in fashion without ceding innovation to male perceptions of how women should look. Her palette sang, too, plus her self-effacing nature—which admittedly could grate—became genuinely moving in her humble acceptance notes.

So in this summer of covid and #BLM, I sought some refuge in mainly light entertainment, but which packed a personal wallop by moving Asians toward the focus. It’s not only their significant presence, but that they speak with no accents and are simply integrated into larger social groups. The just-ended series Fresh Off the Boat had its moments, but the forced (and ever shifting) imitation Chinese-English accents of Louis and Jessica were never highlights. Glad to see tv evolving and embracing non-white leads who are just American kids.
ps - apologies for the terrible layout; Blogger has a new version, and I have not mastered it!
Posted by Susan at 4:13 PM

Email ThisBlogThis!Share to TwitterShare to FacebookShare to Pinterest
Labels: I Am So Not Into This, Netflix, Never Have I Ever, Next in Fashion