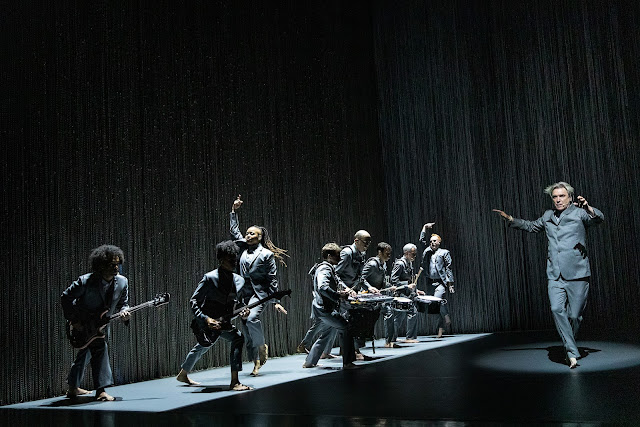 American Utopia, Hudson Theater
If you're like me, do you avoid Broadway? Loud music? Overly enthusiastic crowds? No matter, do not miss this show if possible. David Byrne’s sui generis music, Annie-B Parson’s joyful movement, and an energetic, dedicated cast produce one of the best shows in memory.

New Goldberg Variations, Joyce Theater
In a breakout year for Pam Tanowitz, New Goldberg Variations finally made it to New York’s Joyce in full, and did not disappoint. A perfect evening of pure movement, with Bach’s music played sublimely by Simone Dinnerstein, gorgeous costumes by Reid Bartelme/Harriet Jung, and creamy/vanilla lighting by Davison Scandrett.

One & One, Baryshnikov Arts Center
Vertigo Dance Company, based in Israel and led by Noa Wertheim, presented this work, in which the theater’s floor gradually became covered in dirt. 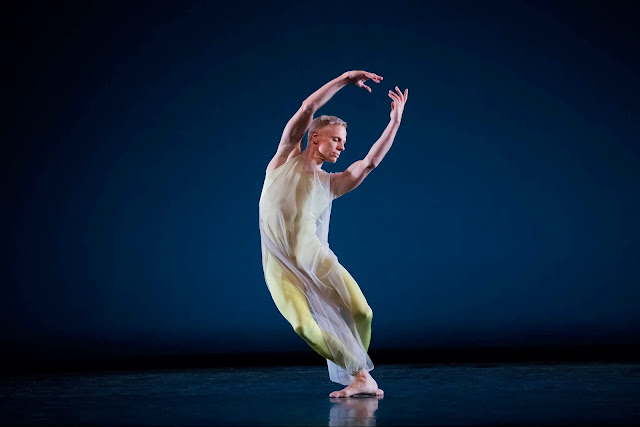 Michael Trusnovec in Pam Tanowitz's All at Once. Photo: Paula Lobo

Michael Trusnovec and PTDC moving on
You’ll finally stop hearing me rave as much about Michael Trusnovec, because he retired from Paul Taylor Dance Company this year. However, he’ll reprise Taylor’s solo by Balanchine from Episodes at New York City Ballet this spring, if you missed it at the PTDC gala program.
About a half-dozen additional PTDC dancers retired from the company, whose evolution is fast-forwarding more than a year after Taylor’s death. The change is probably overdue but the delay, understandable. A smart, bold departure under Michael Novak's direction—to add New York performance runs in smaller venues—the Bach Festival with Orchestra of St. Luke's at Manhattan School of Music, and this summer, a slate of early crunchy Taylor pieces at the Joyce, danced by a slew of young talent.

Agnes Denes
A deserved museum-level survey of this pioneer, yet ignored, environmental artist’s work. It  also validates The Shed’s visual arts program, which until now seemed a bit like an expensive extension of the Chelsea art scene.

Underland, Robert Macfarlane
It’s a bit too neat to parallel this non-fiction essay collection to last year’s amazing Overstory (by Richard Powers), but it makes you think about everything underground, probably for the first time. Each chapter treats a totally different subtopic. Truly mind expanding.

Ninth Street Women, Mary Gabriel
This tome looks at the undersung careers of women artists connected to, and mostly left out of, the oppressively macho Ab Ex movement starting in the late 1940s, including a few whose careers were subsumed by their male partners. Lee Krasner, Grace Hartigan, Joan Mitchell, Helen Frankenthal, and Elaine de Kooning.

American Woman, Susan Choi
This 2004 novel captures the desperation and loneliness of being a fugitive from the government, and the thrill as well. I read this because Trust Exercise, Choi’s lauded 2019 novel, had such a long wait list at the library, and am grateful. The latter book is worth a read as well; it’s completely different in tone and experimental structure, revolving around a theater company.

The Power Broker, by Robert Caro
Okay, I finally read this 1974 monster on urban planner Robert Moses, and it was worth it. Now, moving around the city, I think about his negative and positive impact on the metro area constantly, and how extensive and deep his power ran. Scary and enlightening.


Jane the Virgin
There were many series I watched that came to an end this year, but this was the saddest departure. Gina Rodriguez (Jane), luminous, hilarious, and relatable; Jaime Camil (Rogelio), somehow incredibly self-absorbed yet lovable; Ivonne Coll (Alba), the wise and stern moral compass of the show, whose lines were mostly in Spanish. Structuring it after a telenovela gave it license to be completely over the top while giving audiences the head-snapping plot twists, including serious themes and the all-important nucleus of the daughter/mother/grandmother.