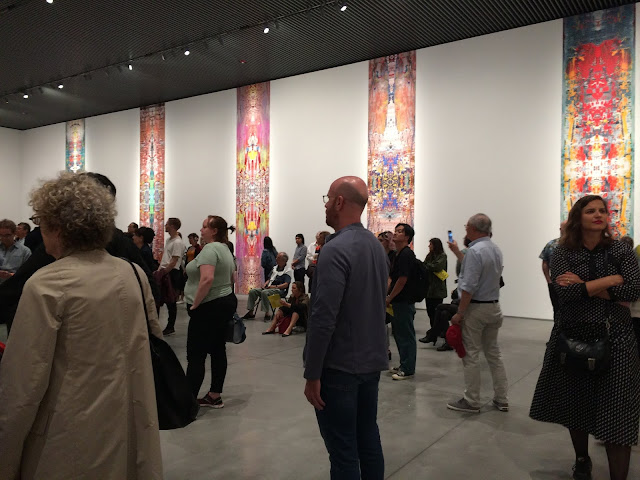 With Reich Richter Pärt, the Shed offered a performative experience that differed from the abundant fare in New York. Practically speaking, this event could take place in one of the hundreds of large art galleries that dot the city, but it is the match-making at a certain level (in this case, by co-curators Alex Poots and Hans Ulrich Obrist) that differentiates the Shed event. The three collaborators—composers Arvo Pärt and Steve Reich, and visual artist Gerhard Richter—make work that, to put it in mercenary terms, commands a high price, or is in great demand. It was a visual and aural immersion in work by these titans of contemporary culture, in a gleaming, sterile venue in a fancy-shmancy new neighborhood.

The 50-minute performance began in one of the two galleries housing Richter’s banner-shaped paintings made with a squeegee, and several renditions of such paintings woven into tapestries. (The use of an ancient textile process summons grand traditions in Europe’s once-powerful north—by the French, Flemish, and British—and burnishes the white male power structure of the project.) The audience, on foot, milled about, until the mingling, street-garbed singers began to vocalize (the alternating Choir of Trinity Wall Street and Brooklyn Youth Chorus). The viewers instinctually oriented toward the center, where most of the singers were, but they then wandered among us as they sang, dissipating the focus as they performed Pärt’s pleasing, madrigal-like harmonics, written in 2014.

After this relatively short segment—15 minutes?—the audience was herded into the next gallery, in which Richter’s horizontal stripe paintings covered the long walls above slatted wooden benches. We were told to find seats, either one of the folding camping stools being handed out or a bench seat; some sat on the concrete floor with pillows. The International Contemporary Ensemble (alternating with the Ensemble Signal) was situated by the far wall, and began to play Reich’s new commissioned score—a fairly gentle, ebbing composition for this composer whose driving, percussive scores have evoked trains and rolling thunder. 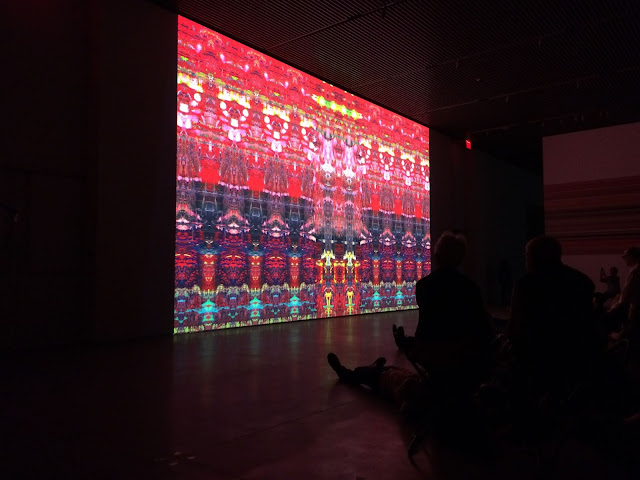 On the opposite wall, a film by Richter and filmmaker Corinna Belz began. At the start, it resembled the gallery’s stripe paintings, but the pixels began to quaver slightly, and then at a higher frequency. Then the color field split vertically at center, with new imagery unscrolling from this seam symmetrically. The lines thickened, pulsed, and pulled to create ink blot type shapes that began to resemble animals, people, or furniture. (My mind scrambled to make familiar sense of the abstract.) It retrogressed, ending as it began in serene color stripes. The sum effect of the ½ hour film, plus the music, was mesmerizing, albeit almost too easily digestible given the challenging art that these creators are capable of producing.

The performance schedule, with tickets at $25—relatively reasonable for a live orchestra and choral work—broke with the standard once-an-evening-plus-a-matinee routine. Four performances each day were scheduled over two months, giving visitors a broad choice of times. The Shed just finished a run of Bjork’s Cornucopia in the McCourt, the arena-sized space under the sliding shell. On the opposite end of the cultural spectrum, the Shed will present a slate of less-known, presumably local artists in Open Call. The performers each have a handful of time slots to share their work, primarily in the more traditional Griffin Theater, where Ben Whishaw and Renee Fleming performed Norma Jeane Baker of Troy recently. Tickets are free for Open Call; reservations are recommended.

After RRP, I wandered through Mercado Little Spain, José Andrés’ new food emporium in the Hudson Yards mall, comprising an impressive breadth of fast-food kiosks, wine bars, and restaurants. While somewhat sprawling, the atmosphere is friendly, lively, and conducive to walking and noshing. The focus is on authentic Spanish dishes such as bravas (potatoes), churros (fried dough), paella, jamon & queso (ham & cheese), with primarily food service stations, and a minimal grocery shop in the center. The prices seem reasonable, and it somehow fills a niche in a food-obsessed city with a billion places to eat. The Mercado is one of many eateries throughout Hudson Yards, the pop-up, luxe neighborhood (with not only the Shed as its architectural folly, but the Vessel, the shiny, copper shawarma/basket Escher Stairmaster) that seemingly landed atop the train yard and threw open its doors overnight.

That I felt compelled to "review" a food experience within a write-up of a show is indicative of the nature of Hudson Yards. While it isn't terribly inconvenient to reach, mentally, it feels miles distant from most of the city because for so many years, it has been the wild west. Hudson Yards has been built as an all-in-one destination where you get culture, Spanish food, expensive handbags, and million dollar condos. In that sense, it's simply a mirror held up to the city. Time will tell if we like what we see.
Posted by Susan at 8:15 PM