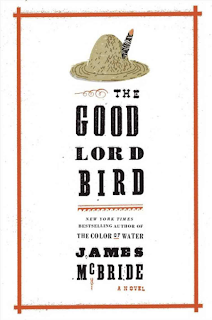 I was just sitting down to put fingers to keys about James McBride's The Good Lord Bird, took a moment to read the newspaper, and saw that he won the National Book Award for it. Hallelujah! A well-deserved award for a captivating historical novel about the abolitionist John Brown as witnessed through the eyes of a young man impersonating a female who gains the nickname Little Onion (referred to humorously as "the Onion").

The Good Lord Bird, named for the near-extinct woodpecker so beautiful that a sighting elicits, "Good Lord!," not only recounts the historical events of Brown's Sisyphean battle, a white man trying to "hive the bees," or rally blacks to overturn slavery when even they weren't so inclined.

Every page contains McBride's whimsical and hilarious observations on human nature and physical impressions. Calm as an egg or a blade of grass. Cool as smoke and all business. Endless ways of describing insanity, such as: his cheese finally slid off his biscuit. Sheer joy in juggling words: fluffling, trickeration, sirring and missying one another.

Even if you think reading about abolition doesn't sound like much fun (although it most definitely is), read The Good Lord Bird for its sheer linguistic pleasures. You'll be swept up in the fascinating (award-winning!) story as well.
Posted by Susan at 9:35 AM