In a dozen years with Paul Taylor Dance Company, James Samson has steadily gained a serene confidence in roles that command authority, or that are paternal or magisterial. He has a knack for being completely unselfconscious yet very present. He also has a playful side (Johnny in Company B) and a quicksilver grace that's somewhat unexpected from one of the company's largest dancers. (I was probably not alone when I was surprised to see him do a perfect handstand in Taylor's highly athletic Three Dubious Memories of 2010.) In a company of remarkable dancers, Samson has become a standout. I recently spoke with the Jefferson City, Missouri native. Look for him in 17 of the company's 21-dance repertory in its annual New York season from March 5—24 at the Koch Theater at Lincoln Center. 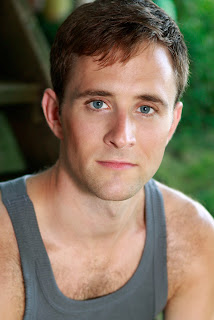 Ephemeralist: What roles are you looking forward to dancing this season?

James Samson: There are a few roles I’m looking forward to this season. One of them is Last Look. It hasn’t been done for a few years, and we’re bringing it back. It’s a role that I can really sink my teeth into, and it’s always different every night, depending on the way I approach it, feel about it... it’s really down and dirty and it brings out a different side of myself, and a different character than what a lot of other pieces of Paul’s require. It’s really fantastic.

Another one is Speaking in Tongues, which we did a couple years ago, and I have a wonderful duet with Laura Halzack, that I really enjoy. it’s another piece that is definitely character-based, and it’s so deep... it’s something you have to look at and view a few times to really get everything. I feel like you could watch it over and over and you could always find something new. But it’s a great role. I’ve always had a lot of fun doing this new part. I’m considered the younger self of Michael Trusnovec, who’s the Preacher. So I get to do this duet as Michael’s younger self with Laura, which is beautiful and fun. I have a great time working with her.

E: I have a list of the dances you’re in, and it’s pretty extensive.

JS: There are a few.

E: Seems like Last Look is really a favorite among the dancers.

JS: Yeah, it really is. I think everybody has a great role. It’s so different than anything else, and that we can indulge ourselves in in a different way... bring out the mean and the ugly in ourselves, throw our bodies around. It’s such a physical piece and that’s why we love to be dancers in Paul’s work. A lot of his pieces get really physical like this, and it’s so demanding, and at the same time, when you’re done, it’s such a huge reward. The audience usually loves it. The set is quite amazing—I think there are about six mirrors set up—and we see ourselves onstage. We see kind of the ugly parts of ourselves—something that’s more vulnerable, something we don’t really like about ourselves—and that is what kind of creates our movement and our motivation for becoming the characters that we are.

E: Maybe I’m generalizing, but it does seem like you do get cast in a lot of “good guy” roles.

JS: Well, I have that all-American look, so I guess it kind of goes hand in hand! [laughs]

E: Obviously you’re very graceful, but you do share a kind of groundedness, a muscularity, with, for example, Paul himself... have you ever talked about this with Paul?

JS: He hasn’t really discussed it with me on a one-on-one basis... he does generalize that kind of feeling and emotion to the company in general when we’re not really doing it the way he wants in certain dances. But being grounded is a huge staple in Paul’s work; being down on the beat instead of being up, so many times in his choreography. And I guess it’s kind of the natural way I move as well, and just seeing Paul himself dance in videos earlier in his career, where you can really see how grounded... he’s the most fluid dancer I’ve ever seen on video. His style of moving is something that I try to encapsulate, but of course no one will ever live up to it, or be like Paul Taylor. That’s very far fetched. But he’s such an inspiration. But being a bigger person, it’s easier to be grounded.

I just see how he moves, and make it my own. I definitely try to be fluid; it’s something I’ve always worked on. It’ll never be something that I stop trying to approach; it's a style of moving that I really love. Being the size that I am, it’s kind of that juxtaposition of muscularity, but also trying to find the smoothness in everything. That’s an aspect I like to bring out onstage—something that people don’t quite expect. It is a natural thing. People move their own natural way, and that’s kind of the way I do it and approach it.

E: You’re now one of the company elders!


E: How has your role and approach within the company shifted with time?

JS: The more senior you get, Paul likes to challenge you a bit more and put you in those bigger roles. He really has that respect for his elder dancers; he keeps them in mind, keeps challenging them. And putting them in roles that feature them because that’s his loyalty. He has a huge loyalty to his dancers, and treating them well that way.

My approach does continue to manifest every year. I always try to approach the same dance in a different way every time I do it. Over the years... when you first get into Paul Taylor, you’re so excited, and you have so much energy... it’s full out, like 150% all the time. So over the years I’ve learned to take that down; I still do everything to its full potential, but you have to find the finesse in things, and just let your body speak and kind of take over the movement. You don’t have to really push as hard, but you still have to do everything to its full potential.

I just try to find what tries to go with the fluidity, that we mentioned earlier; I try to find the ease in Paul’s movement. Each dance is so different from one another, so I try and find a different personality and a different way of doing each piece. As I get older in the company, I have to find new ways of taking care of my body. I’m quite into yoga these days; everything gets stretched out and I try not to get too tight, because the season is very aerobic and hard and challenging... so I try and find some peace outside of all of that and bring it all together and let my body relax. So the approach kind of changes a little every year.

E: I’ve been watching you since you joined the company, and it’s been really neat to see how you’ve evolved within the rep, and each year you get bigger, more prominent roles. It’s been really great to see you seize on them and make them your own.

JS: Thank you so much, I appreciate that.

E: Are there any roles in the rep that you haven’t dance but would like to?

JS: There’s quite a few [laughs]. They’re all roles that I really admire that are done by, like, Michael Trusnovec and senior dancers in the company. I’m not sure I’ll ever be given that chance; we’ll see what happens in the future. We’ll see who’s around, and what roles are exchanged and given up to other dancers later on.

But there’s a lot of things I’d love to do, just to do something new. I’ve always loved the opening of The Word that was created by Andrew Lebeau. I think that would be an amazing task to take on and try. Esplanade is one of my favorite dances, and I did Michael's and Rob Kleinendorst’s role that they share right now. When I was in my second year, I did that for about a year, and that was always a great role to do, and it might be fun to try that role again, now that I’’m more experienced.

E: Have you done Aureole, the solo?

JS: Oh Aureole, thanks for bringing that up. I’d love to try Paul’s part in Aureole. I think that would be really great because you become very vulnerable onstage; you’re by yourself. I don’t really have a lot of roles in the company where I’m onstage by myself for a long period of time. And I think that part would be a challenge for me because of that vulnerability; you have to have a lot of confidence going into that role, and it’s not a lot of fast movement, it’s very slow and articulate, and I think it would be a really nice challenge, and something to work on and strive for. So we’ll see what happens with that.

Probably one of the biggest parts I’ve had is Paul’s part in Orbs, which I did last year. There’s a huge solo in that piece where I’m onstage quite a bit and I dance my butt off. It’s probably one of the hardest roles I’ve every done. That was a great challenge. Paul’s roles in general; everything that he’s done in the past, they're something that people kind of strive to do. When you take it on, it’s something that you want to make him proud of, and kind of approach in your own way, but fulfill it in a way that he expects it to be fulfilled.

E: How do you feel about moving to Lincoln Center?

JS: I’m so excited. We were there for the first time last year, and I was so hoping we’d go back, and we are there again this year. I love the area, I really love the theater... for a few reasons. All the dancers are on the same floor, whereas at City Center, we were all divided amongst four floors. So we’re all united on one floor; it’s very easy to get to the stage. And it’s such a high profile area.

There are big posters on the side of the building, and it’s like being in Paul’s company is like the top of the top in modern dance, and being at Lincoln Center is the top of the world for us, as far as a performance venue. It’s just a great feeling. You feel like you’re a huge star being there! I’m so glad that we get a chance to show Paul’s work in a space that’s accessible to so many more people, and can bring in an audience that hasn’t seen Paul Taylor before, and keep them coming, and bring friends and family. I hope we continue to stay there. It’s a really great feeling and I feel very safe there. The staff is really fantastic. I just really love it.

Such a lovely dancer. Great interview!